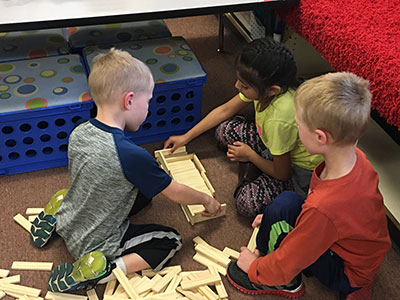 One day during our Embryology Unit, students were given a task to construct a habitat for a chick by working in teams. Oh, excitement was buzzing around the room, and individual kids were talking aloud about their ideas. All I could think was, oh boy, this either can go well, or it could be a fiasco within minutes.

They knew their target (I can construct a habitat for a chick.) and their success criteria (Teams must work together. Team must problem solve.) Now, it was time for the Purposeful Task. Their task consisted of getting into a team, decide on a building material to use, work together to construct one chick habitat, and take a picture with one iPad.

It was ‘GO’ time! I couldn’t help but think that I was going to have to put out some fires. I was envisioning teams arguing about what materials to use, how to build it, feelings hurt because teams members would not use their idea, etc.

Nothing. I could not believe my eyes or what I was hearing. Kindergarten kids (we are talking 5 and 6 years olds…people) were having conversations and problem solving with each other. They were collaborating, compromising, and being respectful to each other. Strategies such as ‘Rock, Paper, Scissors’ were being used to make decisions when there were two great ideas. Where had these kids come from?

These Kindergarten Kids had embraced “Student Teaming” and their actions proved it. They owned their learning and were so engaged in learning with each other. It’s moments like this that validates that “Student Teaming” is setting these kids up for a successful future!