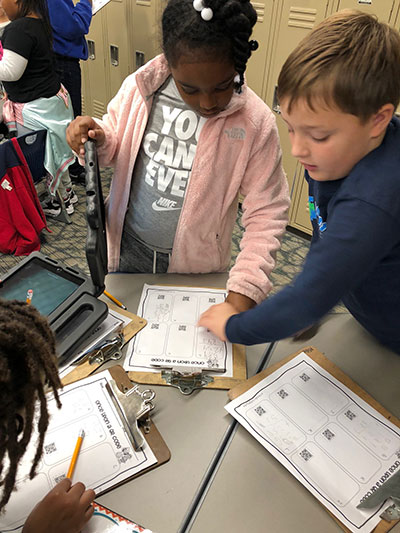 My second graders are fairly new to teaming this year. They are experts at partnering and group work. However, they truly learned what it meant to be a team this year and how to hold each other accountable. One particular story comes to mind that not only illustrates teaming, but also showcases how even second graders can hold each other accountable for their learning. I have a student in my classroom named Sam. Sam has an IEP for reading, behavior, and for a multitude of other areas. Sam has truly struggled with reading this year and is not typically a student that I would pick to facilitate a reading group. I went out on a limb one afternoon and decided to give him a try at facilitating. The students were in groups of 4. Students had team roles: facilitator, reteller, questioner, and checker. The facilitator’s job was to read the passage to the group and lead their group through the activity. I gave Sam that job, knowing that he could not read. Watching from a distance, I saw him step up to the challenge. He knew he could not read well, so he started delegating. He assigned each member of his team a section of the reading passage. After they would read, he would have the reteller restate in their own words the account of the story. He went through the entire passage in that manner until he noticed that his checker was slacking at their job. It was at that point I heard him say, “Jay, I need you to do your job. You’re affecting my learning, and I want to go to college someday!” My heart soared at that moment! Sam was a struggling reader and a behavior problem in my classroom. However, he accommodated his own learning and was holding everyone on his team accountable for their learning as well as his own. This story shows that academic teaming to reach a goal isn’t just for the high or gifted students. ALL students…readers, non-readers, etc. are capable of contributing to a team with an academic goal in mind!